Let’s start downstairs, with the all-important kitchen-gathering place.  It’s located in the original tenth-century square tower.  In French homes and apartments, the kitchen with its table is of such supreme importance that sometimes there is no living room as we know it.  A big table in the kitchen, or a table in what would have been the American living room is testimony to the importance of sharing meals and conversation with family and guests.  I was so busy enjoying delicious convivial meals at this table with Nicole and Pierre and their friends that I neglected to snap a photo with people gathered round.

Note the beautiful blue double-stove, with brass accents.  The left side is wood-burning, and was used most while I was there.  On the right is a gas stovetop and electric oven.  In the right corner is a small modern sink.

Nicole cooking at her amazing stove.

I like to cook, but my main motivator is a love of eating.  Nicole’s passion is cooking to nurture family and friends. She herself eats and drinks sparingly, leaving the intense enjoyment of her superb meals to gourmands (her term) like Pierre and me.  Nicole swears by fresh ingredients purchased at marchés (like our Farmers Markets) in the surrounding towns.  She avoids supermarkets except when absolutely necessary, with the exception of one with a top-quality fish market, which is like a boutique inside the supermarket.

You can see from the wineglasses in the armoire, below, that this home is no stranger to large gatherings.  The door on the left leads to the other parts of this three-room kitchen suite.  Bread is served with every meal, and is sliced on the side table at left.

Behind this thick battered door is the pantry, with appliance storage and a dishwasher.  Nicole keeps a relatively modest stock of staples and canned goods here.  I feel sheepish to admit that my own small-kitchen pantry contains more canned, bottled and packaged foods than hers, and I don’t cook daily for family and guests as she does.  Here, it’s all about fresh ingredients and not stockpiling staples.

The space which links kitchen and pantry opens to the foyer, opposite the Renaissance doorway to the staircase in the tower.  It contains a very large refrigerator, and an ancient stone sink and drainboard which fascinated me.  This shot of the sink with light streaming in the window is my favorite château photo.

I sometimes just sit and gaze at this still-life of the weathered old stone sink.   To me, it is beautiful, simple in its utility, with the light streaming in like  a blessing.  It connects me with the long history of the château and people who lived here down through the centuries. 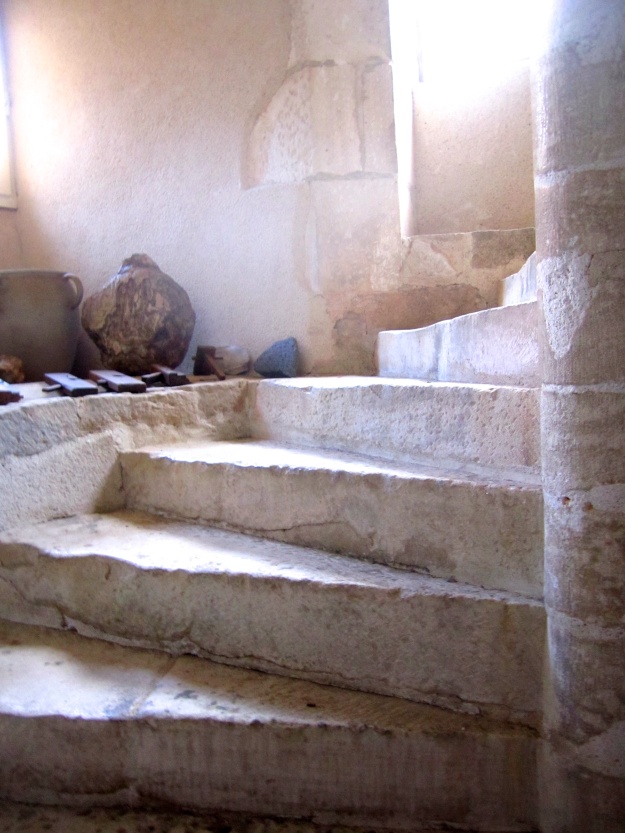 Up the stairs we go to the main living level.  As you might imagine, a castle is an expensive proposition to heat.  Pierre told me that enormous amounts of heat are lost via the stairway, which allows cold air to permeate every level. 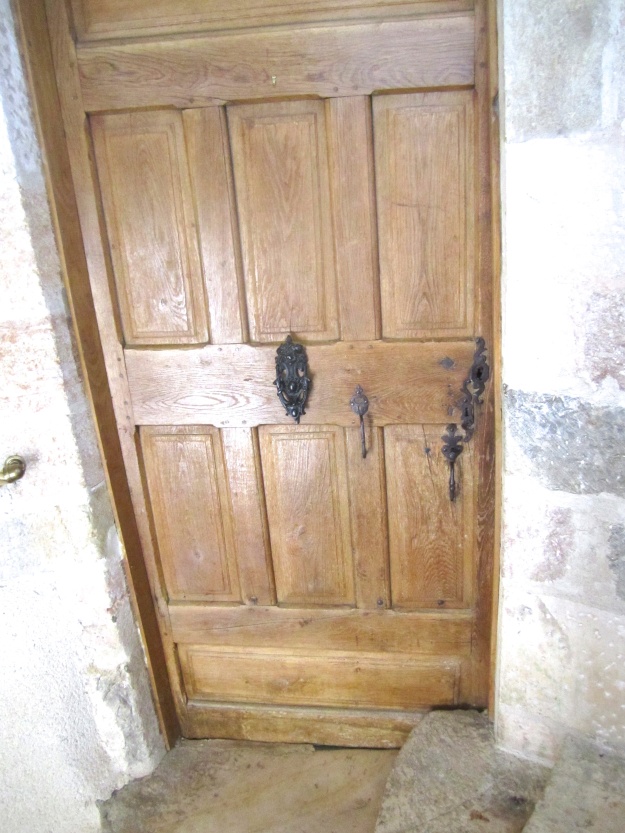 Twenty-some steps up, we arrive at the entrance to the main living area.  The substantial door opens to a small vestibule, with a heavy lined drapery as a second line of defense against intrusive cold air.  Push aside the drape and you are in an enormous, light-filled Great Room.  It’s impossible to show in one photo, but here’s what might be your first view.  The main grouping of chairs and sofas seen here  is ready for the group of Anglophone expats who come for the “Ecole Nicole” French conversation group each Wednesday morning.

Here’s the circle full of English-speakers.  On the right, you can see the heavy drapery which keeps out drafts from the staircase.  Gathered here at Nicole’s école (school):  a British actor, an Australian painter, Dutch neighbors, an Irish Lord, the English proprietress of a nearby B&B, an American writer and assorted other characters who live in the area and want to improve their French whilst having a good time.  Speaking French was de rigeur while class was in session. Well, except when Nicole stepped into the dining room to take an important phone call. English immediately erupted. One of the Brits acted as our lookout, to warn of Nicole’s return.  Like a bunch of naughty school-kids, we were.  🙂 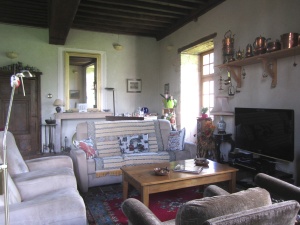 There’s room for six or seven to comfortably lounge here in front of the large flat-screen TV.  It was also a comfy spot for before-dinner kir apéretifs  (white wine or champagne with a splash of crème de cassis) and nibbles. 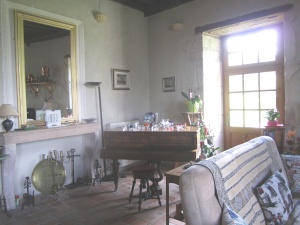 Even on cloudy days, the Great Room / Grand Salon is bathed in natural light.  I love that comfort has not been sacrificed by furnishing with period antiques.  After all, this is a château where real people live.

And Victorian-era couches and chairs are just not comfortable à mon avis (in my opinion).  Oops, wrong monarchy.  But you know what I mean.  There is a place for modern comfortable furniture in a medieval living château.

There is a scene in Downton Abbey with Lady Mary and her nouveau-riche newspaperman fiancé.  They are looking at the gigantic empty country castle he has just purchased for them to live in after their marriage.  He speaks of buying acres of furniture to fill it, and wonders at her ill-concealed little grimace. Why?  What?  “In my family, we inherit our furniture,” says our upper-crust heroine.  Pierre and Nicole have inherited some of the furniture at Château de Balleure, most especially here in the formal dining room.  They in no way inherited the sort of snobbishness that Lady Mary displayed. Meals are served in this dining room interchangeably with downstairs; it seems to mainly depend upon where Nicole prepared the meal. The second, much smaller kitchen is here on the main living level. 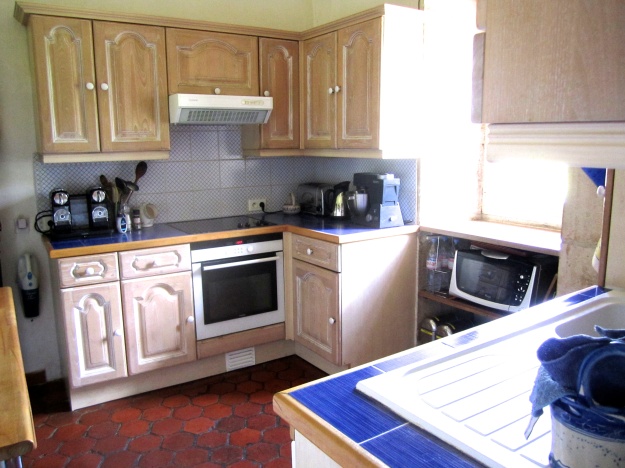 Voila!  A very modern, compact kitchen.  The meals prepared here were every bit as delicious as those in the lower kitchen with the blue-and-brass wood stove.

Elsewhere on this level are an office, the Master Bedroom suite and a small guest bedroom in a spare tower.  But those are private.