Burgundy (Bourgogne) is a famous for its wines: reds made from the pinot noir grape, and white chablis wines made from the chardonnay grape. But that’s not why I came here this time.   I wanted to improve my French. On Lynne McBride’s lively blog “Southern Fried French”, I found what sounded like the ideal French-immersion experience.  I signed up to spend two weeks at Château de Balleure, located in the very southern tip of Burgundy.

On May 16, I took the train from Lyon to Tournus, about an hour and a quarter ride.  From there, it was about a twenty-minute drive through scenic countryside to Balleure. From the moment I arrived, we spoke only French — all day, every day.  The best part was being welcomed into the daily lives of my wonderful hosts, Nicole and Pierre Balvay, and into the village life of tiny Balleure (population 60).

View as you approach the château.

Je vous présente (I present to you) Pierre and Nicole, my charming and generous hosts. 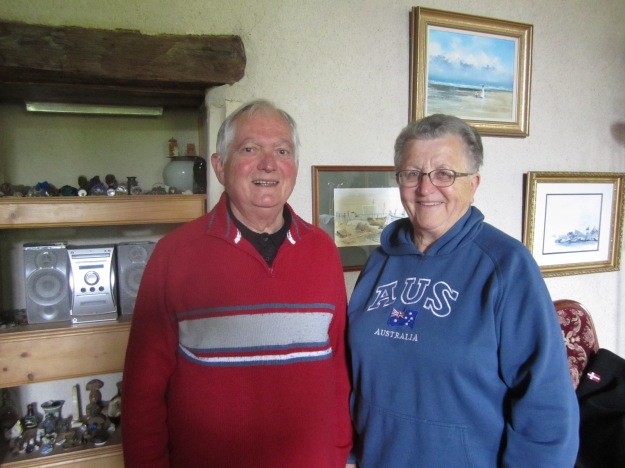 Château de Balleure has been in Pierre’s family since 1791. His ancestor bought it after the French Revolution took its toll on the sort of nobility who had formerly owned estates like this. It is an authentic medieval château, austere and not overly ornamented like the architectural styles that followed.  I was told that it’s the best-preserved medieval château in Burgundy, and the amazing thing is that it’s not a museum, it’s a comfortable welcoming home. The oldest part, a square tower, was built in the tenth century by the local Seigneur (Lord).  He and his friends gathered there when they were out hunting.  In that era, Gentlemen had two main pursuits: Hunting and War. The former was a sort of practice for the latter. The tenth-century square tower is the one with one window per floor, just beyond the parked cars, below.  The  third-floor window marks my bedroom.

After exiting the parked car, you walk past the square-trimmed tree and through the arch into the courtyard.  In the fourteenth century, with permission from the king, the Seigneur expanded the original square tower to create a château which could harbor the townspeople in times of attack.  What you see above the arch is the outline of the drawbridge.  There was a moat around the château, and entry was via that bridge at the second level.  Châteaux of the Middle Ages were quite plain and practical–nothing like the ornate and ostentatious ones of the 18th century, which were built for leisure living, and to impress others.

Below is another view, from the far side. The blue car is in the courtyard. At one time, you would not have been able to see this view, as the central courtyard was entirely enclosed by the château.  The history of France is that of wars and hard times.  This château didn’t escape them and in its long history, parts of it were destroyed.

This picture was taken on one of only a couple of days during my stay which had blue skies.  The rest of the time, it was some of the worst spring weather since 1887–gray skies daily, with plenty of rain and cool-to-chilly temperatures.  After a long, cold, wet winter, everyone in France was ready to welcome le printemps (Spring).  It hadn’t arrived by the end of May.
The retaining walls in the picture below are what remains of the moat.

Evidence of the long-ago moat.

A digression: At the right is a nearby restored 18th century château, which has a moat-for-show.  The nobility of those days, like many of the uber-rich and under-occupied in any era,  were all about appearances and superficial concerns. One thing hadn’t changed much from medieval times: the Lords were often off to war.  The one who had this built this was killed in battle four years after the family moved in.  His private living quarters were never finished in the manner of the highly ornate rest of the castle.  The young widow, married at 16 and widowed at 22, was left with four children–and an impressive but lonely home which, like today, would have been expensive to keep up.

Back to Balleure:  Shown here is the present entrance, off the courtyard, with an arched window above double doors.  The doors open onto a stone entry chamber, which was probably not always enclosed.  I suspect that the arched wood door to the left of the present entrance was once the main entrance. It opens directly to the stone stairway.

Once you pass through the modern entrance, you find a doorway on the left which accesses the 700-year-old spiral stone staircase winding sixty steps up to access the many living spaces.
The doorway to the stairs is framed by a graceful renaissance style arch, which is identified as fifteenth century in family archives.  It was a serendipitous find when Pierre and Nicole removed layers of plaster from the walls of the entry.  Medieval?  Renaissance?  What I figure is that while the château was built in the late Middle Ages and is essentially a medieval building, it was certainly not preserved in its original state for seven hundred years.  Remnants of the drawbridge and moat are testimony to that.  We can safely assume that its various owners tweaked it here and there over the centuries.  Remodeling is nothing new, though there are special challenges when you’re dealing with thick stone walls, minimal plumbing and no electricity. Pierre and Nicole labored nearly 30 years to bring the château to its present comfortable state, doing most of the work themselves on their “vacations”. 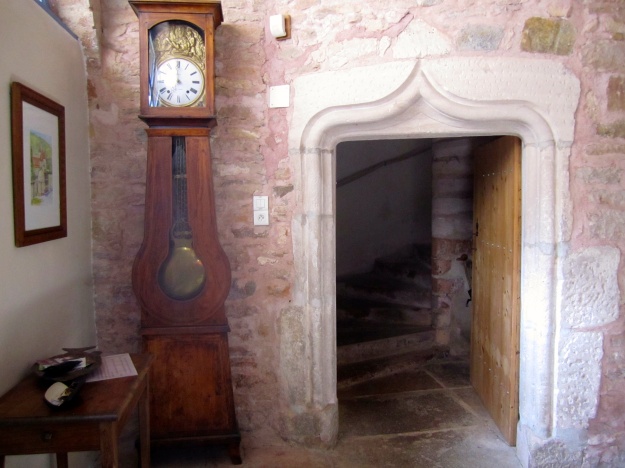 Below:  In the stairs-tower, there are two windows with wide sills on both interior and exterior which give a hint of the thickness of the wall.  Antique carpenters’ tools and a collection of other utilitarian items from earlier eras are displayed on the ledges.

That’s all for now!  You are in the door of Château de Balleure, out of the rain.  Interior spaces will be revealed in good time.